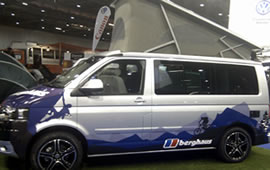 This year’s Keswick Mountain Festival, from 18-22 May, is set to be the busiest since the event was launched in 2007.  What was already the festival’s biggest programme of activities and speakers has now been enhanced thanks to the support of Berghaus.  Some of our sponsored athletes will be at the festival as well as Berghaus staff who are competing in a major mountain biking race. There will also be a Berghaus Recharge Bar featuring the new special edition VW California campervan.

Both Sir Chris Bonington and Adventure film maker Alastair Lee will be part of a full speaker programme at the Theatre by the Lake.  Alastair Lee will get the festival off to a lively start on the evening of 18 May.  His combination of stunning action, slick editing and irreverent humour has made films such as The Asgard Project and The Prophet both hugely entertaining and multi award winning.   This approach is reflected in his one man shows.

Later in the week, on 21 May, climbing icon and Berghaus chairman Sir Chris Bonington will be making an appearance.  Sir Chris Bonington is Britain’s best known climber and has been exploring and mountaineering for over 50 years.  He led the team that put the first Brit on the summit of Everest and has an almost inexhaustible supply of first ascents and fascinating adventures to recount.

During the epic two day mountain biking event at the festival a team of two Berghaus staff will take on competitors on a mountainous course that covers 130km over two days (21 and 22 May) and follows a route through the heart of the Lake District and climbs more than 3,000m.  The race will start from the Adventure Base in Keswick, the hub of the festival, which will also be the location of the Berghaus Recharge Bar.

Located at the heart of the Adventure Base, this will be where competitors and visitors go to relax during the day and after their various challenges and activities.  The bar’s main area will be decked out with large outdoor beanbags and funky seats. Refreshing shakes will also be on offer with good food from local companies and real ale will be available for those wishing to indulge, including the new Berghaus Beer.

The Berghaus Recharge Bar will offer visitors the ideal location to soak up the atmosphere for the festival, listening to live acoustic music which will be played from mid afternoon until about 8pm on Thursday 19 and Friday 20 May.  Also on display in the bar area will be the new special edition VW California Berghaus campervan.  The result of an 18 months long collaboration project, the van on show at Keswick is the first of its kind and will be driven to the festival by Berghaus staff as the first in a series of outdoor trips and adventures that will last for the next six months.

Full details about the festival can be found at www.keswickmountainfestival.co.uk