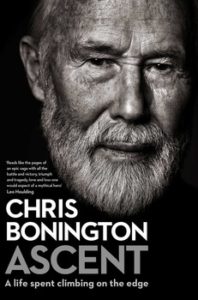 ‘These well chronicled chapters of Chris’s life read like the pages of an epic saga with all the battle and victory, triumph and tragedy, love and loss one would expect of a mythical hero.’ – Leo Houlding

‘Bonington was a fabulous and very creative climber. He brought Britain back to being a leading nation of climbers.’ – Reinhold Messner

Nineteen Himalayan expeditions, including four to Mount Everest are under his belt. He last climbed Everest in 1985 at the age of 50, and has made many first ascents in the Alps and greater ranges of the world.

Be fascinated by his many daring climbs, near-death adventures, and the many luminaries of the mountain fraternity he has climbed with. The mercurial Dougal Haston; the legendary-tough Don Whillans, the philosopher of the rock Stephen Venables, and the enigmatic Doug Scott, plus many more. This will be an expert’s opinion on the past sixty years of British and world mountaineering.

In Ascent Chris also discusses his first wife Wendy, who tragically passed away after a long battle with motor neurone disease. Chris decided to return to an iconic climb from his past, The Old Man of Hoy, to summit at the age of 80. He has now found love again amidst the sadness and grief; it is a truly inspirational tale.

Ascent is a memoir like no other, from one of Britain’s greatest climbers. Not only is it a cerebral narrative on what it takes to conquer fear, learn and develop the technical skills necessary to climb the world’s greatest peaks, or what it is like to survive in places no human being can ultimately reside in for longer than a few months at very high altitude, but also how one overcomes emotional obstacles too, and rediscover what drives us on to happiness.